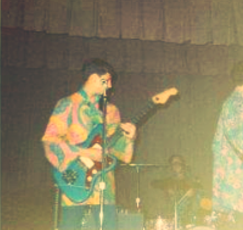 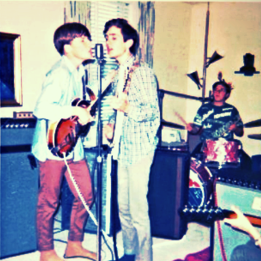 ​In New Jersey a serendipitous shortage of base housing led my mother to arrange for me to live with the Kelly's until housing was available for my family.  Sharing Steve's tiny room we just had space enough for a bunk bed, my amp, and his drum set. Every day after school he would crank up the radio as loud as it would go and bash the drums for a half hour.  After, he would let me have a go at it.  Playing the drums taught me timing, beat, feel, and made me a better all around musician.

At that time the sounds of Motown made a huge influence.  The main source of that audio came from a juke box next to the pinball machines at the base NCO Club.  As we played the Bally games everyday for hours, we got a heavy dose of Smokey Robinson, Sam and Dave, James Brown, and so many more... man, those guys could wail!   Steve and I would try to outdo each other singing our lungs out trying to capture that feel.   Additionally, the San Francisco sound was getting our attention.  Quicksilver Messenger Service, Jefferson Airplane, The Grateful Dead, Big Brother and the Holding Co, and others took the music "out there" with long jams that showed me the freedom music can take.   This soon lead to my first attempts at songwriting.  With Dover friend guitarist Steve Schellinger we set out not to just write a song, but to write a "rock opera" like "Tommy" by the Who.  The results were pretty bad, but it was fun to try.

It was during this time in New Jersey that I started listening to Country music.  Although we had long hair and were playing "Acid Rock", we sort of looked at "hippydom" as a bit flakey.  We saw ourselves more as "long haired good ol boys" just having fun.  As a joke on my birthday, a friend gave me Merle Haggard's  “Live at Muskogee” album.  But rather than scoffing at it,  Merle's smooth voice, the sound of Fender twang and pedal steel guitar struck a note of comfort with me.  I fell in love with Country music.  Late at night I would lie in bed listening to WWVA radio "Home of the Country Jamboree" out of Wheeling West Virginia.  Hearing all the greats, Flatt and Scruggs, Bill Monroe, Ernest Tubb, Patsy Cline, Willie Nelson, and on and on.  So many influences that I couldn't count.  Then the merge of Country Rock took me.  The New Riders of the Purple Sage, The Byrds, The Flying Burrito Brothers, Commander Cody and His Lost Planet Airmen, Asleep at the Wheel, and more were huge influences.  Rockabilly music was too fun not to love.

With school friends we immediately formed our first Rock and Roll band.  Steve Kelly had just got his first drum set, having the ability to bongo out Wipeout on the desktop better than anyone, he was the obvious choice.  He also had a great voice.  Our resident surfer, Alex "Sparky" Whitmer played lead guitar.   His parents were laid back enough to let us practice at their house.  Gary McDaniels and I played rhythm guitars, and needing a bass player I talked Ricky Sexton into buying a bass.  Incredibly, he mastered it in no time, playing fast intricate runs and singing backup. We called ourselves Flash of Darknes, thinking that dropping one “s” on darkness was cool.  We played everything from Dick Dale, and The Ventures surfer instrumentals like Pipeline, Penetration and Miserlou to  Jimi Hendrix’s, Hey Joe and Purple Haze, to The Young Rascals, Good Lovin and Love is a Beautiful Thing.  Additionally, plenty of Beatles, Rolling Stones, British rock, and Motown filled our set list. 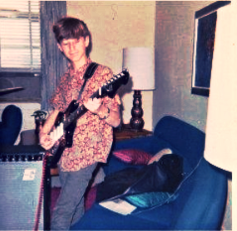 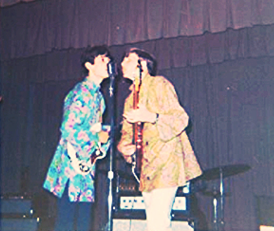 In 1966 the Air Force sent us to Dover AFB Delaware.   Dover was the perfect place at the perfect time for me to learn.  It was the first place where I saw live local rock groups play.   I was inspired by great local bands like The Shepherds, The Critics, The Dimensions, and The Illusions.  Seeing them, I was determined to start my own band.  We still had the old Slingerland May Bell, and a few other acoustic guitars in the house, but I wanted an electric guitar.  Like the kid who wanted the BB gun in the classic film "The Christmas Story”, so was my quest for an electric guitar.  Wilson's Music Store in Dover sold Fender, Gibson and other American brand name guitars and amps.  My friends and I gazed, dreaming of owning such beauties.  But the prices were beyond any of our means.  My dad at the time was making frequent trips to Southeast Asia with stops in Japan along the way.  Japanese guitars were not the same quality, but they were inexpensive.  So, on Christmas day 1967 I got my first electric guitar.  It was a Guyatone LG55 solid body twin pickup with vibrato.  It had a white lacquer finish and a chrome pickguard.  It wasn't a Fender, but it was electric and it was mine.  He also bought me a Teisco 8 watt amp with a 10" speaker.  And, it had reverb!  I was in heaven! 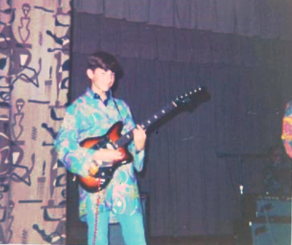 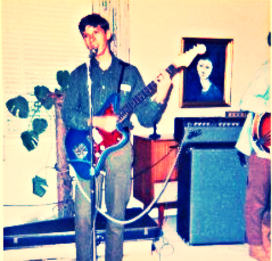 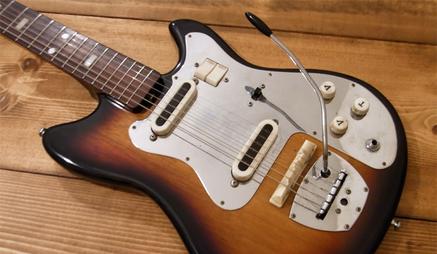 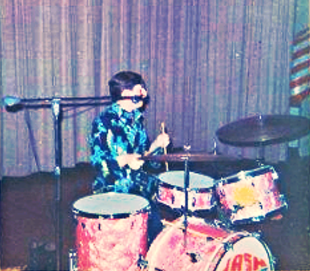 Our first gig was an outdoor block party.  We were pretty rough, but the crowd liked us, danced and applauded.  We were thrilled and hooked.  Our first gig on a real stage was the Jr High Dance.  In the style of the Magical Mystery Tour we decided to have colorful Nehru jackets made.  Ricky Sexton's mom volunteered to sew them for us. All we had to do was pick out fabric, making sure they were colors that would glow under the black lights we planned to use.  Ricky also made a strobe light and to top off the psychedelic light show effect we had a schoolmate work the stage lights, sliding the color levers up and down to the beat.  It turned out to be our pinnacle. After a few gigs at the base teen club the Air Force stepped in and transferred Ricky's family to Germany.  Sparky's dad soon retired from the Air Force and they moved to California.  My dad  got orders too and we moved to New Jersey. Fortunately Steve's dad got the same transfer, and my drummer was coming with me.