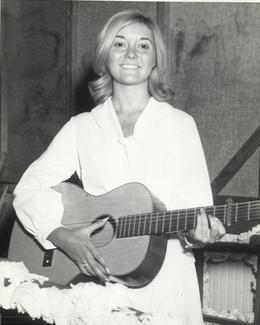 It was in Portsmouth NH that music really took hold of me.

Of all the decades, the 1960's has to be the greatest in the history of music.  Starting unassumingly with mellow pop, folk, country and western, and on the fringe the new sound called Rock and Roll.   Best played at volume, Rock and Roll was not accepted in most conservative homes.   In our house, however, folk music was welcomed with open arms.   A great connection was at hand for me when my older sister, Karen, attended high school.  Smart, pretty and popular, she was outgoing and friendly with everyone she met, including the new beatnik crowd.  Hanging out at the New World coffee house in Portsmouth, she became friends with many of the folk musicians.  Karen had a beautiful voice, and the musicians took her under their wing to teach her to play guitar.  Her smooth renderings of songs such as "Shady Grove", "Fair and Tender Ladies", and "The House of the Rising Sun" mesmerized audiences. Best of all, my mother welcomed the musicians into our big house on 683 State St  where I was exposed to the counterculture of the times.  Mark Dodge in particular was a friend of my brother Rick, and he would hang out at our house frequently and play his guitar.  He was a James Dean type, and I was impressionable. He and other musicians would sometimes have jam sessions in the living room.  The sound of live music was so different from what I had heard on the radio.  I was hooked.

At that time I was enrolled at St. Patrick School where the Sisters of Mercy  ruled with an iron fist.  Music, however, was joyfully encouraged at the school.  The nuns urged us to attend the annual talent show at the Portsmouth High School.  It was a big night, with a packed house in the school auditorium featuring singers, dancers, acrobats and other talented kids from the Portsmouth school district.  Among them was The Breakfast Hill Trio consisting of Nick D'Alessandro and Dick Clark on guitars, with Dick Barron on banjo.  They played a few  folk songs when suddenly , a crystalline moment became etched in my memory. The trio broke into a Hoyt Axton song that had been banned on the radio called "Greenback Dollar".  As they wailed into the chorus, "... I don't give a DAMN about a greenback dollar...", my hair stood on end!  I glanced down the row of seats and saw the nuns sitting there in shock with jaws dropped and looks of horror in their eyes.  With a smile on my face, I knew at that moment that I wanted to be a guitar singer.  The very next day I got out my dad's old May Bell guitar and started trying to play.  The first song I learned was “Ghost Riders in the Sky”.