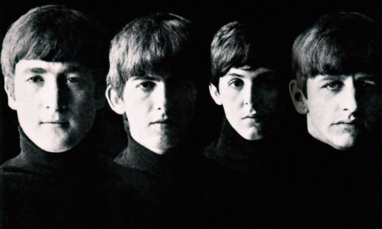 By 1964 two other events happened that inspired and then changed my life.  The first was when my parents bought our first real stereo hifi record player, a Silvertone model from Sears.  What followed was an explosion of music and sounds in our house.  Everything from classical symphonies, Broadway show tunes, country western, pop, and folk music.  I especially liked Chet Atkins, Peter Paul and Mary, Woody Guthrie, Bob Dylan, The Kingston Trio, and many more folk artists.  I spent endless hours listening to every record I could find.


The second event in 1964 that trumped all others, was the night when the Beatles played on the Ed Sullivan Show.  Like most of America, my family was curious to see what all the excitement was about.  On that Sunday night we all sat to witness the TV event.  When Ed introduced  "... the BEATLES ! " ,  I couldn't believe what I was seeing.  Electric guitars,  drums,  matching suits... and that hair!  The girls screamed as they ripped through their numbers.  I vaguely remember my folks complaining that it sounded like noise and they looked like girls.  I was bobbing my head to the beat and annoyed that they were criticizing, till finally I snapped out, "quiet I'm trying to listen!".  My Dad shook his head and left the room, but it was too late.  The dye had been cast.  From that moment on, all I could think about was guitars, girls, and Rock and Roll  music!  I also developed an aversion to haircuts.  The avalanche of music from the "British Invasion" to "Surf Rock" fueled my passion.